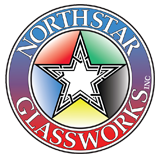 Northstar’s Ruby glass color family is extremely diverse and each of our reds has been carefully formulated for a specific application.

At the inception of our company we developed and released three shades of our original formula Ruby:

When working these Rubies do so in a neutral to oxidizing flame. When heated, they un-strike to a transparent state. When re-heated, these reds start to return to their original red color.

NS-007L is the lightest and will only slightly strike back to its red color in the flame. It is best to kiln strike NS-007L Light Ruby and NS-007 Ruby. This allows the most uniform and even red to be achieved.

NS-008 Dark Ruby – because of its intensity – it will strike easily in the flame or in the kiln. You should note that with these reds over-striking could occur which yields a dull opaque livery red. This can happen by working them too long in the flame or by kilning them too long. When kiln striking these reds, do so by soaking at 1050 deg F until the desired darkness is achieved.

The most recent addition to our line of Rubies is the self-striking Ruby family. This family is comprised of:

When working the self-striking Ruby, work in a hot neutral to oxidizing flame. You will note that as the glass heats up it will turn clear just like a standard Ruby, but as it cools down it will strike to a specific shade that is dependant on its copper concentration.

Thickness also plays a role in how the final color appears, yet even when thinned they are much cleaner, less bubbly, and a more consistent red. Repeated striking and cooling should not result in a shade change or browning specifically with the NS-088 Pomegranate. However, with the two darker shades NS-086 Garnet and NS-087 Garnet Dark, a brown hue can develop in certain applications such as I/O work, thin work, or work in which the heat application is uneven or limited. In sculptural applications the two darker self-striking Rubies approach a deep shade of burgundy.

As with the standard Rubies, the self-striking Rubies have been designed for specific applications. The lightest of the three, NS-088 Pomegranate, is best suited for sculptural applications. It is also ideal for mandrel wound beads. This is because it has the lowest tendency to develop a brown hue.

Because of its intensity, it will not fully strike on its own and the strike must be finished in the kiln at 1050 deg F. NS-086 Garnet, the medium strength self-striking Ruby is best suited for medium thick blown work and some thin sculptural applications. It will fully strike on its own. NS-087 Garnet Dark is designed for thin blown work, stringers, and lip wraps. It is not necessarily recommended for certain thick sculptural work because it can easily yield a deep burgundy brown color.

More information on the Ruby Family